By clicking “Accept”, you agree to the storing of cookies on your device to enhance site navigation, analyze site usage, and assist in our marketing efforts. View our Privacy Policy for more information.
DenyAccept
Part 1
Part 2
Part 3 (coming soon)

Listen to the narrated lore part 1.

The buck moon was ethereal-white and full, illuminating the edges of the clouds around it. The trees and grasslands were glazed with a silver sheen.

The mighty circle of rocks glistened in the moonlight, sturdy and magnificent, calmly waiting to fulfil their purpose. The Mad Sorceress had used the magic of teleportation exactly twelve years prior to bring the stones from the far west coast to the site. Using the magic of levitation, she had arranged them into a circle of arches. Two long vertical pillars with a horizontal stone across the top.

From the moon, she watched. A lone stag wandered into the stone circle, grazing on the lush greenery. The sorceress whispered from the moon to the stone, and between each arch, a glowing force of magic swirled.

The stag looked up and froze. Bathed in the bright colour of magic, its eyes gleamed. The beastly antlers and bulky body cast a black shadow onto the ground.

When the striking ended, the stag stood tall like a human and its thoughts had become much clearer and it roared, “What is this calling?”

The sorceress whispered from the moon, “This is the beginning of a new dawn, and you are The Chosen One. Bow to the ground, and then look to the moon, and I will give you the Magic of All the Ages, and your kind will have the power to rule the Earth.”

The stag bowed low, and its antlers touched the ground, then it stood tall and gazed at the moon.

Through the arches of swirling magic, all manner of deer appeared, all standing tall like humans and jabbering with confusion, scattering into the woodlands.

The Chosen One had never seen such a wonderous and magnificent sight. Each deer had attained artifacts from different times and different worlds. Weapons, fashion, technology, treasures, and other curious things from the past and future.

“Do not run,” The Chosen One called, and yet its new herd continued to scatter. Thousands and thousands emerged through the arches until dark clouds crept over the moon and the magic was over.

The Mad Sorceress whispered, “Unite them. Take what’s yours. The tides will turn.”

The Chosen One charged around the land telling his kin they’d been blessed by a goddess from beyond the skies and that the goddess had ordered them to unite. They gathered at the stone circle to make their plans.

By the early hours of the morning, thousands of morphed deer were camped around Stonehenge.

Inside the circle, the kings and queens from each faction discussed their plans with The Chosen One.

Naturally, there were disagreements about what they should do with their new found powers, but The Chosen One was wise and fair, and suggested they take the lands from the violent humans and divide it between themselves equally to live in peace and prosperity.

Chaos erupted on the outskirts of the camp. Deer roared and howled as arrow fire and rocks rained down on them.

The kings and queens of the deer rallied their troops and fought back, and with their new weapons and armour they pushed the attackers into retreat until they were attacked no more.

“We must build defences and create order amongst our ranks,” The Chosen One said, and the kings and queens agreed, and the beginnings of the Stag Alliance were formed.

Human armies from all over the land attacked the Stag Alliance at Stonehenge. The siege lasted years, yet with each attack the Stag Alliance became stronger and more battle smart. Their technology was too great for the humans, and their spirits were too strong. Centuries of being hunted, they finally had the power to fight back. And eventually, the attacks stopped, and the deer grew strong and spread across the land.

The hunted had become the hunters. The new dawn had begun.

Listen to the narrated lore part 2.

The Chosen One looked upon the throngs of humanoid deer surrounding Stonehenge, all rife with the artefacts and wonders of the Magic of All the Ages, and he recognised the great power and opportunity that the Mad Sorceress had given them.

‘Why?’ he asked her, looking to the soft white moon that had not yet disappeared from the pale blue sky.

The Mad Sorceress gave no answer.

The Chosen One felt alone and uncertain, despite having thousands of his kind all around him. He was unsure of what to do next, and so he sat silent meditating in the middle of the stone circle until a voice from inside him called out, “Those who led the herds before this magic, come forth. Come forth now and we will create order amongst our ranks.”

Ten stags and ten deer answered the call and their herds cheered as they were crowned kings and queens to rule ten clans in prosperity.

The Magic of All the Ages gave select deer the skills and tools needed to build and protect an advanced society.

The strongest of the deer became Knights, enlisted to protect the realm with weapons and armour fit for the most advanced warfare the world had yet seen.

The most intelligent and strategic of the deer were appointed as Politicals, entrusted to help the Royals rule fairly and with prosperity. They were given extravagant robes and jewels in reward of their service.

Those with the skill of the hand and creativity became Makers with all the tools and implements needed to build an advanced society.

There were also those who were blessed with the power to conjure spells and create magic. The Conjurers’ powers came from their enchanted antlers and could be used in battle and in other endeavours to further society.

Finally, there were the diverse and vibrant Citizens who had all manner of weird and wonderful clothing and trinkets from all the ages.

One night, a messenger arrived at the stone circle where The Chosen One and the Royalty were camped. The messenger reported of an army of humans attacking the outskirts of the settlement. “Flaming arrow fire and slingstones hailed down on us as we drank and ate and laughed around our campfires,” she said.

King Courage of clan Courience was appointed to gather the Knights of the Alliance and charge out to counter the attack. The deer were strong and well-armed, but it was their first battle and their inexperience showed with lack of discipline and organisation.

The First Battle was bloody and brutal, and the deer lost many Knights pushing the humans into retreat. Eventually, the human army fled and the camp around Stonehenge enjoyed peace once again.

The Chosen One gathered the Royalty, the Politicals and the Knights who had shown courage and strength during the battle. He encouraged the Alliance to build defences around their settlement and reinforce the defences with magic, and that the Knights practice their battle formations and that the Makers and Conjurers work hard to further their craft while the Citizens gather stores of food and drink and help out in every other way they can, such as making the fires and clearing the paths.

The Royalty and the Politicals agreed with this plan, except for King Glutton, who expressed distaste toward The Chosen One. “Who made you the supreme leader? I postulate that you made this Mad Sorceress up to trick us and gain power over us all,” he said.

“I did not ask for this,” The Chosen One said. “I merely suggest the words that come to me. It’s as if they come from some magic deep inside of me. I do not know why the Mad Sorceress called me ‘The Chosen One,’ and I do not know my purpose here,” he said.

“Then perhaps you should keep your nose out of matters concerning us Royalty,” King Glutton said.

Queen Prudence said, “We’re here to build a prosperous empire and The Chosen One was the first of our kind. Let us not fight each other, save it for the enemy. There will be plenty in this world who will not accept us for who we are now, and there are those who hunted what we once were for sport and food for centuries.”

All cheered, and King Glutton grunted and huffed, eyeing The Chosen One with daggers.

The Chosen One could feel that this would not be the last of the troubles from King Glutton, and perhaps others in the Royalty when they realised what levels of power and opportunity they now had at their disposal.

Time passed peacefully, too peacefully, The Chosen One thought, as the deer built a grand settlement of wood, stone and hempcloth buildings around the stone circle. It was fortified with an outer wall and all manner of defences made from stone, wood and magic. The settlement was named Moonstone, and it was magnificent.

Excitement and joy amongst Moonstone were widespread, yet The Chosen One could feel that those days of peace and happiness were limited.

One night, The Chosen One woke startled with the sound of a harsh whisper lingering in his mind from a dream he could barely remember. They’re coming! the whisper said, and it felt like the Mad Sorceress was hissing at him from afar.

Moonstone’s warning bells rang loud and daunting as the settlement came alive from its slumber. The Chosen One climbed to the top of the settlement’s tallest outpost and saw little dots of firelight growing in number across the deep blue and black night’s horizon. The dots of fire spread and multiplied with the silhouettes of an army of thousands. Infantry, siege engines, cavalry, and beasts unknown, approached Moonstone.

Archers, guards and Conjurers attended the walls and prepared the defences of Moonstone as the great human army marched upon the settlement.
The Siege of Moonstone had begun. 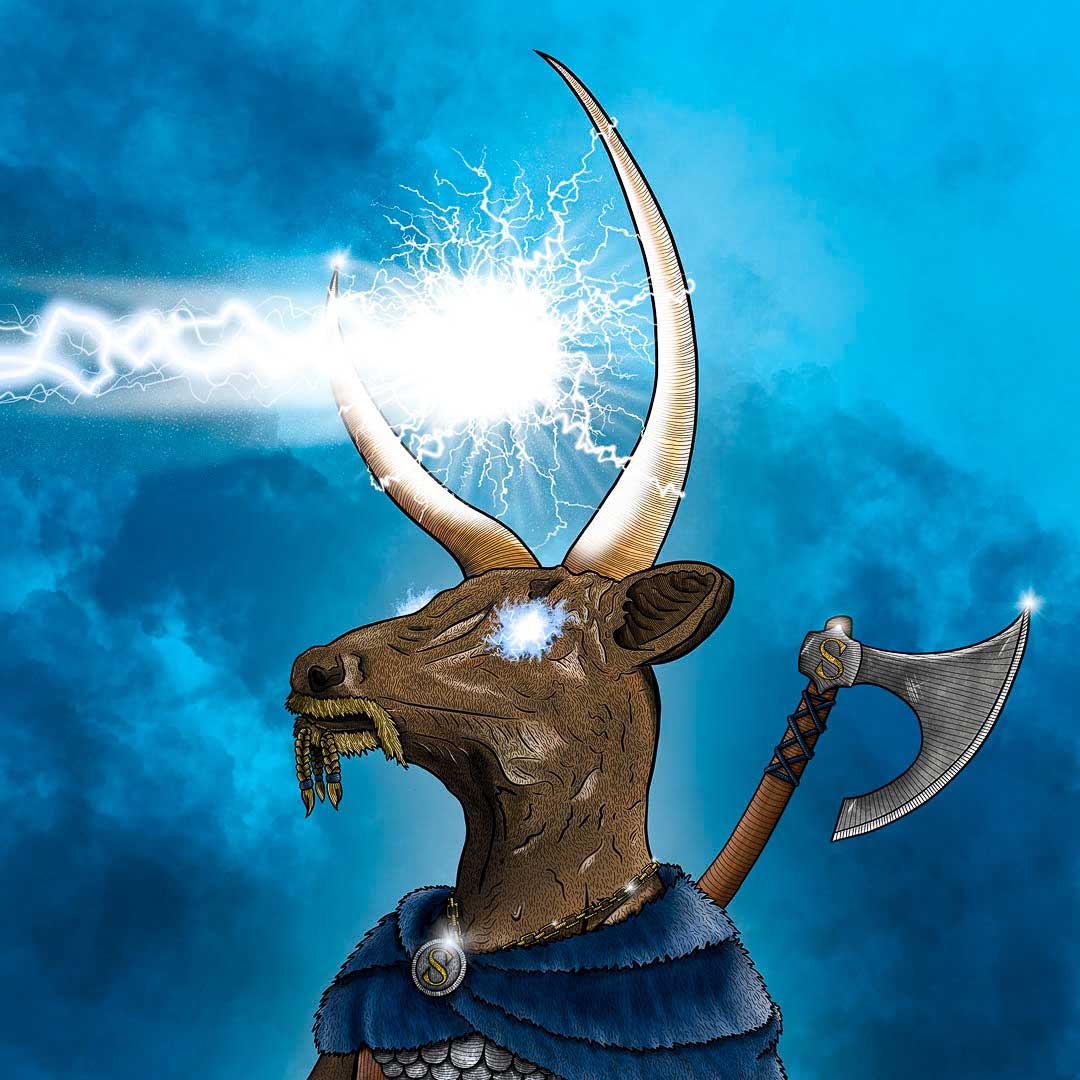 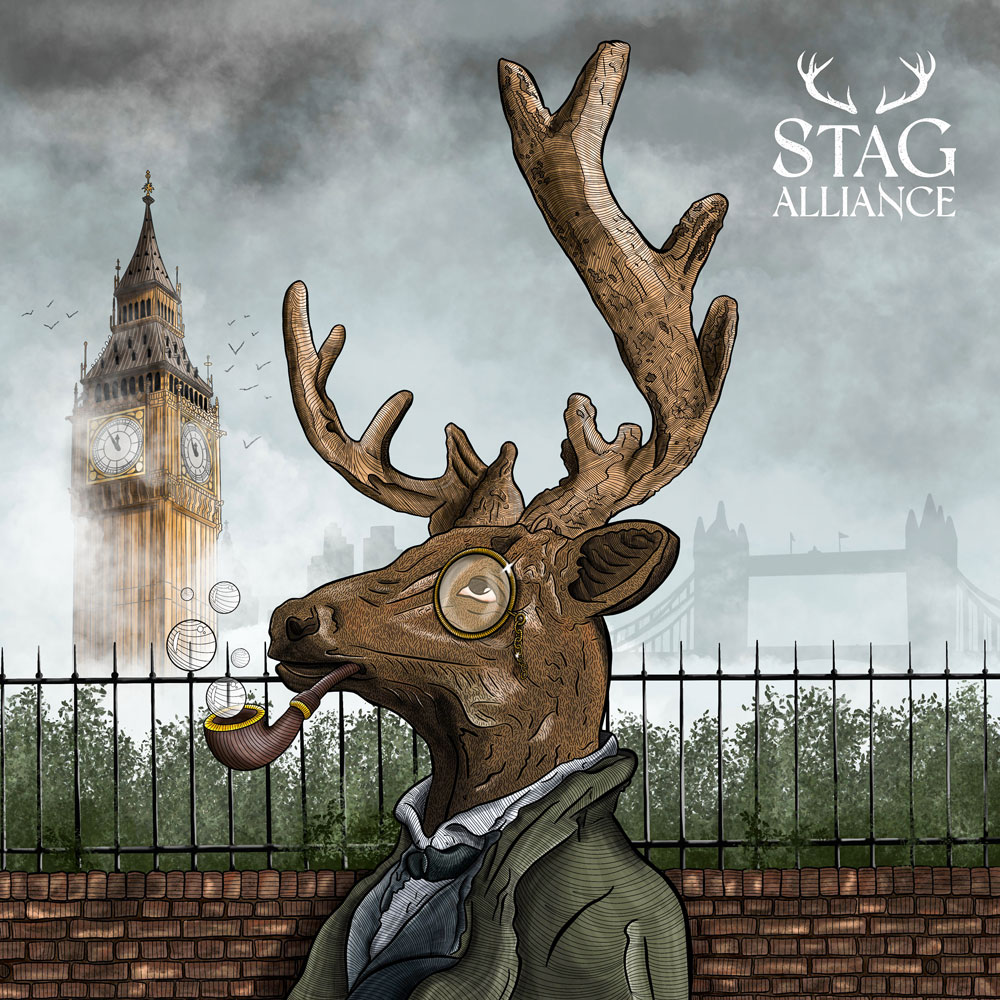 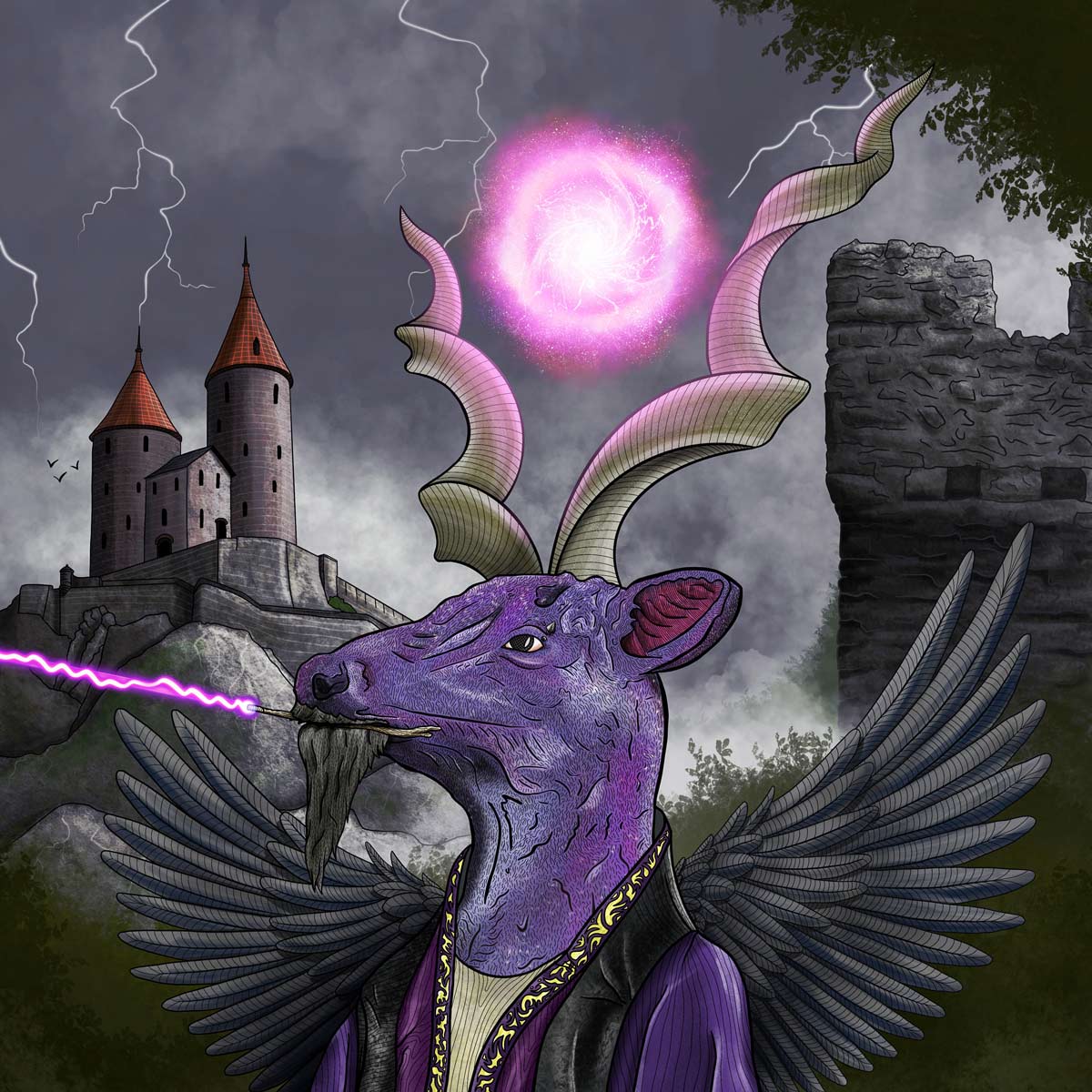 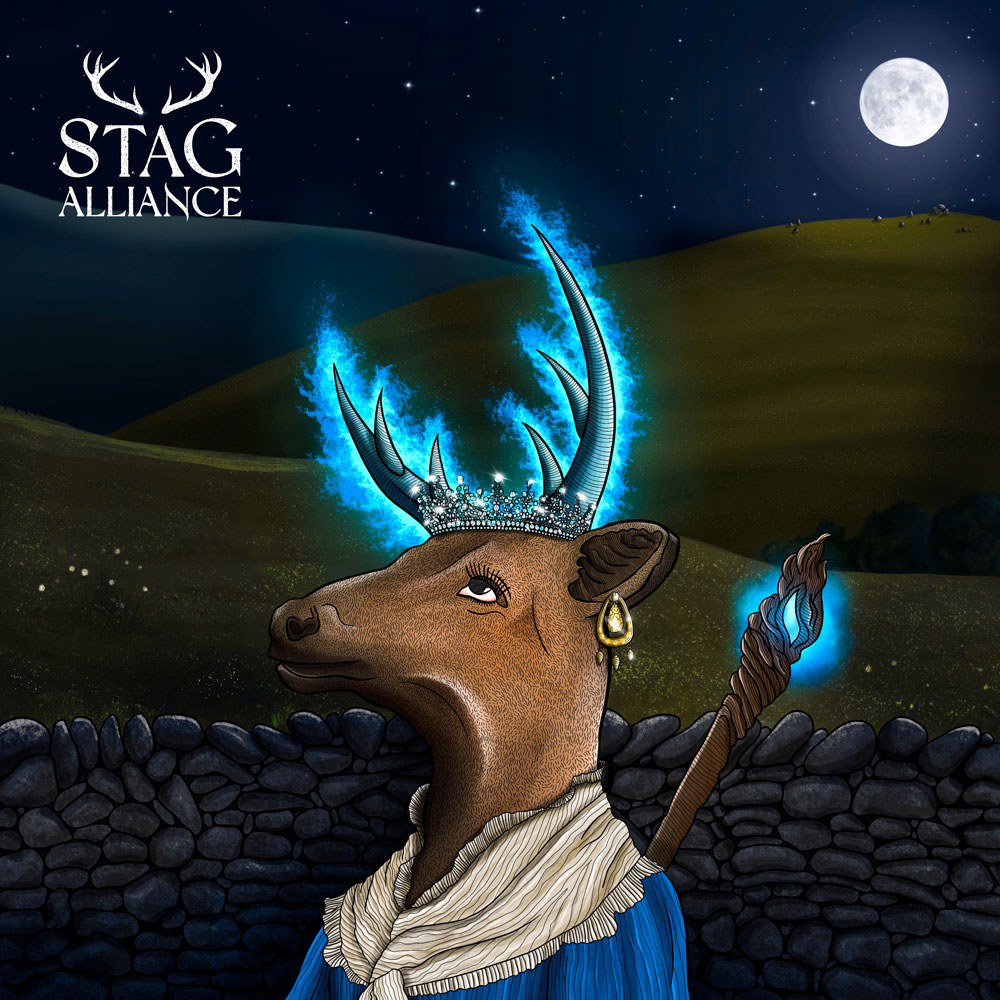